September 12, 2014
(A Japanese Chopin fan, traveling alone to Warsaw, Poland for the first time)
Summary of the day: "Apparently, ladies with straight cut front hair is in fashion here now."
Walking miles under sun in previous day, and staying in the middle of city, I had a slight headache and not feeling well. But I ran anyway, wanted to see the old town under the morning sunlight.

Going to the Chopin Museum is the one of the biggest objective of this trip, so I hopped on Tram on a bit after 10:00am

However, living in U.S., I have had experienced seeing people's blank face to the name "Chopin", it was so unreal he is actually treated as a hero, just like in my mind.
There was many manuscripts, letter and sketches from 19th century; Some of the sketch seem to be too handsome and made me giggle. Looking at those manuscripts of the scores are priceless! He scratched out many lines, some annoyed lines... meanwhile, some super-organized lines, as if the manuscript itself is a prepared for a gift;
All of songs I know, I have been feeling those songs in my heart for long time.


There is a little cafe next to the Chopin Museum, so I took a lunch there.
Next destination is Łazienki Park. I started to walk to the bus station. I saw something interesting there; 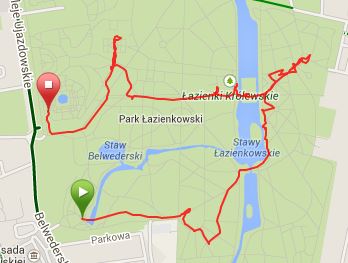 Łazienki Park has many, many beautiful palaces and the outdoor theater. There are tickets to go inside of the Palace, and I believe one of them is operating as a restaurant, but because of physical fatigue, I did not go in there.

On the way to go back hotel, I stopped by tourist information center at the Science and Technology museum right next to the central railway station. I asked if any trains from the central station take me to Chopin's birthplace tomorrow. The guide said, "Ahm... you can. but train is not direct. You should use tourist bus better"  and wrote down "MortorBuss" and its station very close to the central station.

I went to the stop, and it turned out MortorBuss is private touring bus.
..
I have strange, personal preference to use local transportation whenever I go to unfamiliar place.
I know it is risky, but I like it because I can feel how local people lives in that way.

So, I ignored the advice, decided to use local commuter train. Also, reserved round trip to Krakow for Thursday.

At dinner time, I was defeated by my nationality thus crave for rice. So I went into sushi restaurant. The sushi rice was too tight, and fish was not so yummy. Maryland, U.S. won for the non-Japanese sushi making. :P