May 27, 2019
Summary. Nice pace climbing up, though failed for my ill-planned route coming back. 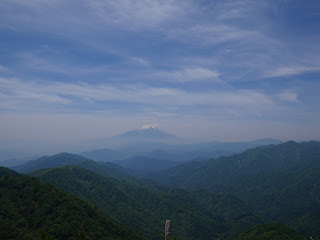 I arrived at Shibusawa sta. 6:45 am, and the line of the people who were waiting for the first bus to Ookura stop, the entrance to the hiking route, was quite long already.

At the Ookura stop, there was a Caucasian guy who seemed to be inquisitively looking at hiking registration post and its card ... written in Japanese only.  So I helped him to submit hiking registration. The city of Hadano should also place a multilingual hiker registration form.
The route I took was starting from the prefectural forest park. The route is well managed and paved alongside the river. Most of the people I rode with bus apparently used another major path to To no dake. So the path was quiet. Other than the odd entrance to open the netted door for deer to get in, the route reminded me of walking down Yarisawa last year. 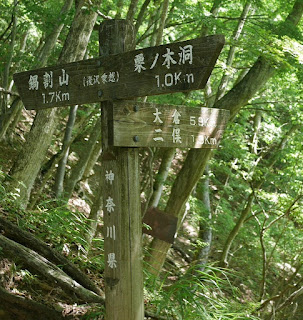 The path to climb up to Nabewari mountain was quite steep. My heart rate hit high according to my GPS watch. Also, my new phone was kept beeping for not having internet access. I was annoyed and thought it was a silly default. If I don't have the internet, the last thing I want my phone to do is using extra power and draining out its power. 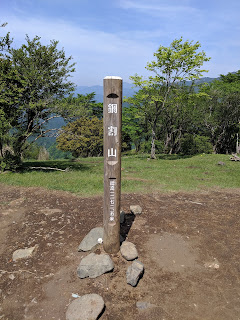 At the top of the Nabewari mountain, there is a hut serving Udon noodle. Originally, I was thinking of eating udon for my breakfast. However, ... no offense. I admire the effort to serve any food in 1200m point without access road for vehicles, but I lost my appetite after noticing so many fries in the back of the hut, presumably their kitchen area. Their hygienic standard simply did not serve for me personally. Everyone else should go ahead and enjoy their udon (1000 yen). But I personally preferred eating my own riceball.
I used their bathroom and paid 100yen. No flushing the toilet paper in the mountain!

The path from Nabewari mountain to the next destination, To no dake was quite easy.

One of the named ridges is called "Kin Hiyashi", where is supposed to be high and frightening (Kin is an implication of male genitalia, so the literal meaning of the word is "shivering genitalia"). But I did not find the ridge was scary, compared to the place around the Hirugatake, the other side of the Tanzawa.
The top of the To no dake also have a hut. Back in the day, an animism group worshipped the mountain. The Inn served for the congregation.


From the To no dake to the last destination, Tanzawa mountain, which is considered to be the most significant mountain, was also an easy-going ridge road. Having said that, in my opinion, Hirugatake is higher and significant with more serenity with it. But the service they have with Miyama hut  is indeed through and have more staff member here.
I used their bathroom(100 yen), bought 500ml water (500 yen, mountain price) and purchased mountain pin badge.(800 yen) 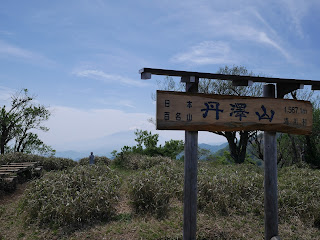 Coming down from the top of Tanzawa, I chose the Tennoji peak route, which was the beginning of a chain of my bad decision. The route is well managed but filled with gravel limestones, and some parts of the path are collapsed. I used up my muscle strength coming down this route. 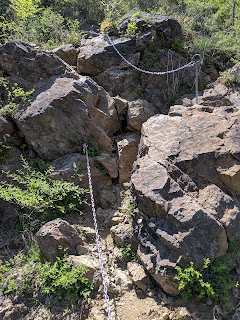 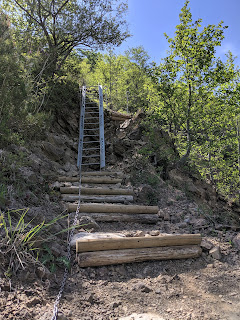 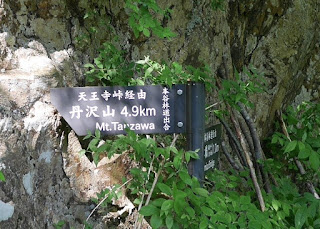 Getting on the paved road, prefectural Rd. 70 at 16:00, I found NOTHING along the road. I honestly expected to see some vending machines, after coming down the graveled path, otherwise, paths consisted of intricated roots for 3 hours under 33 centigrade (91.4 F) and I was dehydrated. 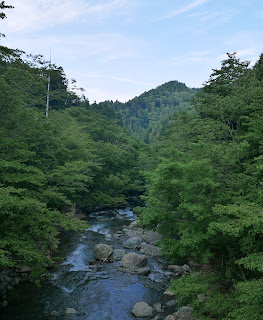 I decided to walk along the Rt. 70, hoping I will find either a vending machine or coffee shop. The effort ended in vain. I did not have internet access in almost the whole time including in Rt. 70.
Survival first. I started to focus on resolving my hydration problem. I looked for any possible water serving point in the map. At the climbing entrance to the Omote Tanzawa major course, I found a water spring. I walked up there, I filled spring water to my 1 liter Nalgene bottle. Paid 100yen.

Next. Getting the heck out of this Rt. of nothingness! The route is not only void but many speeding vehicles running down since the winding road is an attraction among motor enthusiasts. It is dangerous for pedestrians to walk along. I finally noticed my cell phone service recovered when I reached Yabitsu peak, where used to be a battlefield, and have numerous rumors of haunting (and many suicides follow). I called a cab at this point at 18:00. Also, after deep consideration, I used that haunting public bathroom while waiting for the cab.
There was another solo dude, parked his car at the parking lot, and tried to have a conversation with me. I had a short and casual conversation with him. No one around while waiting for the cab and it was getting dark. Considering just in case situation, I called my husband on speaker phone, started to have a conversation aloud in English with my husband over the phone.  I repeated  "Human is far scarier than ghosts." in my mind.

The cab arrived, and I paid 4,690 yen for the service to Hadano station. I could ask the cab to take me to the closest major bus stop, Minoge bus stop so that I could have saved money. But I was exhausted and wanted to go back home as early as possible. 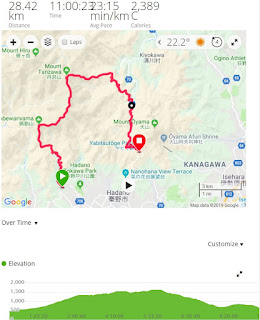 Next Omote Tanzawa trip, I hope I could plan better so that I don't have to use a cab to go back to public transportation.
Hike Solo trip Trip