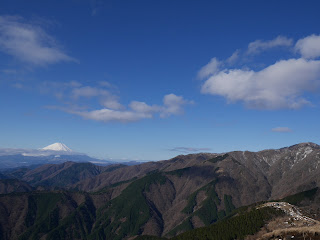 Summary: I need sunglasses and crampon to climb Tanzawa between Dec to March.

Even though I visited the same exact mountain in the last week, I wanted to climb up there from the other side my myself.
I originally planned to start from the bus stop at Yabitsu peak, but I heard the bus stop was temporarily closed down due to the snow fall last week. So, I decided to get off at the alternative bus stop at Minoge bus stop. It left Hadano station at 7:05 and reached the destination around 7:30ish.
It took 1 hour extra walk to get to Yabitsu peak using Kashiwagi path. The path is peaceful with natural fountain and old remains of villages. That was good. However, when I reached Yabitsu peak, there was a bus. Geez, the bus line was fine and operating. I should have taken the bus line to Yabitsu bus stop to save my energy for an hour's walk, but well, Kashiwagi path was beautiful and useful connecter between Yabitsu sparsely operated) and Minoge bus stop (frequently operated). So, that was a gain of knowledge after all.

The entrance to the mountain is a bit away from the bus stop. The starting part of the path requires steep climbing, but rather enjoyable. On the other hand, some remaining snow creating a frozen path was not enjoyable for me at all. I should have  my crampons and sun glasses. My bad.

The weather was beautiful. This path was great to see the whole Tanzawa cluster of mountains. But parts of the narrow ridge were even narrower due to several harsh storms in this year, and a bit dangerous to path through.

I saw people who are enjoying para gliding and parachuting.
The notorious vertical gap with chains that make climbers to use their upper arm strength was scary as hell. I regretted I should have waited until my left arm completely healed. Also, I have to admit having weak upper left arm break my balance whenever I had to pass a shady part with snow on the ground.

I reached at the peak around 13:00. The place was packed with climbers. I only had a sweet bean bread and a rice ball. I crave for a warm meal. I will bring my gas stove next time!

There was a trail running group who apparently a westerners father, a Japanese mom, and their teenage daughter and their friends. As an another international family, who run trails, I was ashamed of their behavior lacking consideration for the other hikers.

The basics of trail running from the textbook are
1. If you are running crowded trails, you are supposed to slow down and walk when you pass other hikers. Meaning, you cannot run crowded trails in weekends.
2. Do not casually scream at each other. This is peaceful mountain, not a training track.


I used the Ohkura "stupidly stairs" path to go down, and reached Ohkura bus stop 15:20. 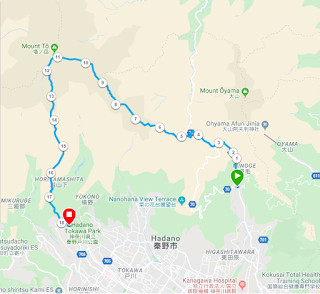