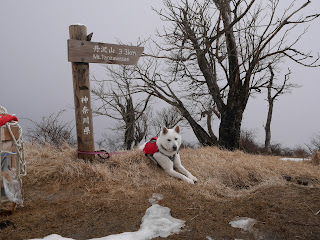 Among several routes to climb up Mt.Hiru, I like the routes from Aone village, since these routes have the least climbers because of  its inconvenience in public transportation.

In the early morning, I drove to Kibikara yama Parking Lot.
The parking lot could contain barely 5 small cars, but was empty at the time of 6:30 am.

Going through block gate build for vehicles, permitted to go over for walking climbers only, I walk on the paved road up to the intersection to Haccho-saka route.

BTW, if you see any climbing path prefixed by "Haccho", that would be the indication of steep hill in Japanese climbing community. The path going up to Haccho kashira would take good 2.5 hours of walk.

Here is what I tried to record a video footage with GoPro. I apologize for my clumsy angle configuration, since my phone app was not prepared well for this expedition.


After reaching up to the top of Hacchozaka, the route change to a nice and easy ridge route to Himetsugi (where used to kill daughter from bushi house); This is the mid point of the route.

It was clear sky, and I could see Mt Fuji and the destination Hirugatake hut at the top of the mountain. 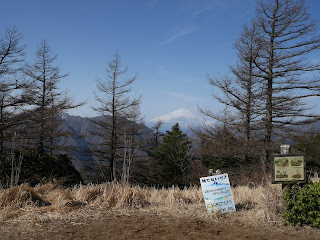 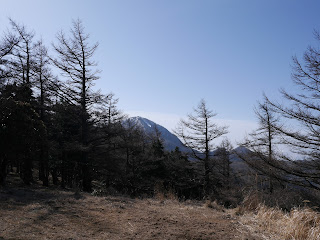 The route from Himetsugi to Hirugatake is fairly easy, except for the very top area of Hirugatake.
It was quite long climbing staircases. Snow was still remaining on the stair cases, so I had to use extra thigh muscle to stable myself, no need to mention additional work to suppress a little excited puppy attached to me.

The route was so quiet that I could hear choir of dripping water with different tones from melting snow.
This mountain is the best for meditation.
By the time we reached to the top of the Hirugatake hut, we completely lost views. The sky gradually changed its appearance, so we were surrounded by fogs unlike the clear sky in Himetsugi. I borrowed bathroom there(200 yen), and bought pin badge(500 yen) and 500 ml of water (500 yen). 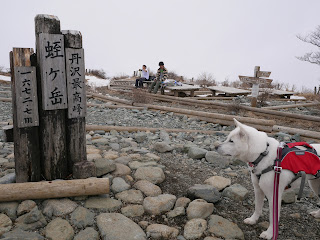 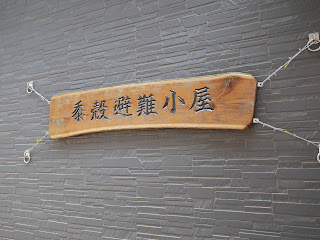 Kama-dachi-sawa is a bit of d-tour to go down compare to Haccho saka route, but is better maintained. The former is valley route, the latter is minor ridge route. 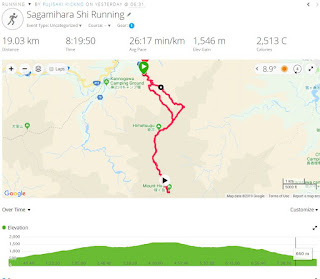 P.S. The place is in the peak of cedar new leaves shooting out. I don't recommend this place to people suffer from hay fever 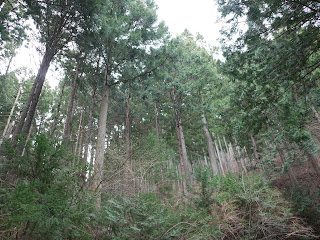