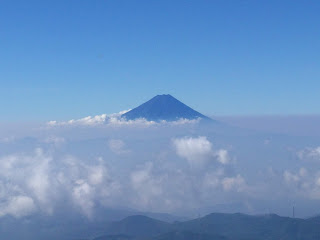 We arrived Mawarime-Daira camp site around 10:00, which were a bit later than we planned, due to the 3 days weekend. Good parking spots were already taken, but we managed to take a good and shady spot for 2 nights. 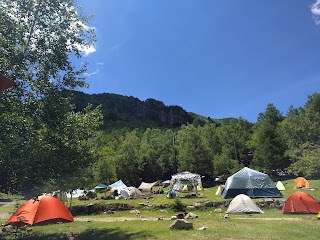 Mawarime-Daira camp site: 2800 yen for 2 of us, with parking for 2 nights. They offer their bath for 400 yen per person. You can buy fire woods for 550 yen, and if you purchase garbage bag from them for 200 yen, they will take care of the garbage, otherwise you should take back all garbage.
They have luxury of water-flowing toilet, and one of them is western style.

Also, some facilitators set up gramping of matching party there prepared for the long weekend. We kept hearing fake laughs of these party.


In the next day, we started climbing at 5am to the top of Mt. Kinpu. The path was altered due to their construction, but we could reach the top of the mountain around 10 am. The place was crowded by the people who came in from the other path. The mountain have 4 different course than where we came from. 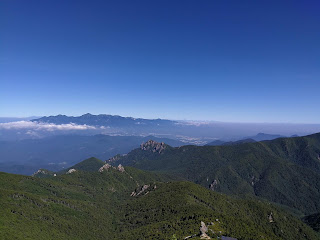 The weather was beautiful. I tried to climb up the famous Gojo Rock, but I could not figure out how to get up there after the middle point. However, a person tried after me figured out and went up the top! I learned from his maneuvering in his climbing, and hoped I could steal the technique in the next time.

There were elder people who were eating in the middle of the rocky path. I learned younger people are more considerate than older people in Japan, particular in terms of behavior in mountains. 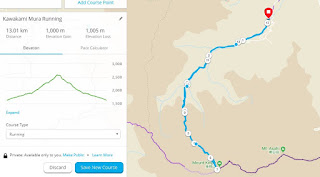 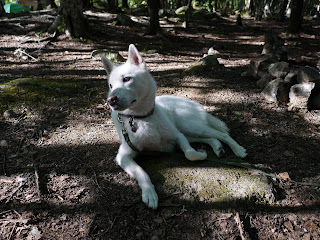 Caming back to the Mawarime daira camp site, enjoyed sky with filled with stars and alcohol.
The bath was lukewarm around the time of 14:00, probably because it was too early for the prime bath time. Oh well...


Kawakami Village was notorious for lettuces slavery village.
In fact, we saw none of Japanese field workers, but all southern Asian workers.
We, U.S. family know from the example, if the country take slavery into account, ethics break down, then eventually the culture collapse. (In short, conservatism sucks)

Foot note of Strong feeling:
When we went down the path in the Kinpo mountain, I noticed a dude in his 60s-70s coming up, so I stepped aside to give him the narrow path. He immediately changed his wooden cane to his left hand, which was the side we stepped to.
I sensed his fear. Very likely, it was his fear of dogs.

Not surprisingly, he opened his mouth, said "Do not take dogs to mountain". I talked back, "Why?" he replied, "Because dogs are bad to soil and birds". I asked again calmly, "Are human not bad to soil and birds?" He muttered and kept clime up. My husband were also talked by this dude, but he did not understand what the dude said. He reported the dude smelled like alcohol.

From my experience of dog ownership, people who bitch about mere existences of something different from them, such as dogs, are the people who FEAR of the them. In the case of canine-phobia, they probably did something nasty to dogs and got backlash in their childhood.
This pattern reminds me white supremacist in U.S. where  people are simply in fear of retribution.
My answer to them is; Find your shrink, prick.